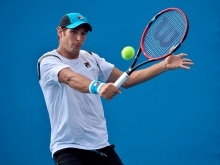 Dusan Lajovic (better known as "Dutzee") grew up in Serbia and began playing tennis at the age of 7. Before turning pro, he trained at the Catalonian Federation in Barcelona. He won his first career ATP match in 2011 at the World Team Cup in Dusseldorf. In 2013, Lajovic qualified for 4 ATP World Tour Tournaments including Vina del Mar, Buenos Aires, Acapulco, and Umag. 2014 was a big year for Lajovic, who finished his first full year on the ATP tour at the no. 69 spot- his first time in the Top 100. He won a career best 16 matches in the 2014 season, competing in all 4 Grand Slams for the first time, and also helping Serbia to retain World Group status for 2015. In 2015, he broke his previous match record, winning 17 tour-level matches, including one at Roland Garros. Lajovic is an avid supporter of FC Barcelona and says that if he wasn't a tennis player, he would be a football player. He is trained by Strahinja Tomovic and Milos Galecic and hopes to one day win a Grand Slam title.

Parents are Dragisa and Marina. Favourite surface is hard and shot is backhand. Favourite tournament is Doha. Idol growing up was Pete Sampras.