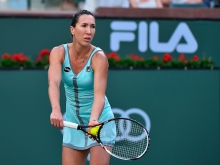 Jelena grew up in Belgrade, Serbia and was introduced to tennis at the age of nine. Jelena turned pro in 2000 when she played her first WTA Tour qualifying event at Philadelphia. Over the next two years, she honed her skills and played her first main draw event in Indian Wells. She had her first Top 100 season in 2003. Jelena's break out season was in 2004 when she won her first WTA Tour title in Budapest, reached the semifinals in Linz and reached the quarterfinals four times. Consistent results throughout the 2005 season placed her in the Top 20 of the WTA Tour ranking for the first time in her career. In 2008 she reached the Number 1 Ranking on the WTA Tour and was a singles finalist at the Australian Open and the US Open. Jelena continued to finish the tennis season in Top 10 for four of the next 7 years. In 2013, Jelena joined the ranks of players who have won over 500 matches. In 2015, she was a finalist at the BNP Paribas Open in Indian Wells.

Coached by brother, Marko. Parents are Veselin and Snezana (economists); brothers are Marko and Stefan (university graduates). Introduced to tennis at age 9 by brother Marko. Graduated from Megatrend University in Belgrade with Master of Business. Speaks Serbian, English and French; learning Spanish. Favorite city is Rome (for its history). Enjoys designing clothes for her fashion line. Admires Monica Seles. Biggest appeal of being a pro tennis player is seeing the world and learning about other cultures. Awards received include Female Tennis Player of the Year in Serbia (2007, 2008, 2009); Oscar Of Popularity for female athletes in Serbia (2009, 2011); Tennis Player of the Year in Serbia (2004); and Junior Sports Girl of the Year in Yugoslavia. In 2007 was named UNICEF National Ambassador to Serbia.