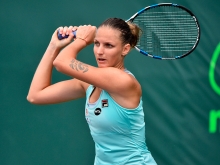 Karolina was born in1992 in Louny, Czech Republic and began playing tennis at age 4. She played her first events on the ITF Circuit and first WTA qualifying at Prague in 2006. Karolina won the 2010 Junior Australian Open. In 2014, together with twin sister Kristyna, became the first twins in the history of the WTA to win a WTA doubles title (WTA Linz). Since then, the twins won two more WTA doubles titles together. Karolina won two WTA Rising Star Awards of the Month (2015 February, 2014 October), while being nominated four times and including three consecutive months (2015 April, 2015 March, 2015 February, 2014 October). She has won 4 WTA singles titles and 10 ITF singles titles. She has 4 WTA doubles titles and 6 ITF doubles titles. In 2015, Karolina became the “Queen of Aces”, where she surpassed all other WTA players to hold a No. 1 position on the ranking for number of aces. 2015 was Karolina’s break-through near Top 10 season where she finished number 11.