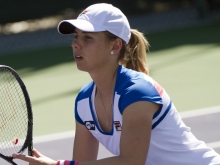 Marina started playing tennis at age 6 when she was introduced to the sport by her father and sister on neighborhood courts in New Zealand. The young power player who was born in Croatia, made her debut on the WTA Tour in 2006. Reaching a career-high singles ranking of No. 49 on the WTA Tour in the summer of 2008, Marina Erakovia is only the second New Zealander to ever crack the Top 50. In her first Top 100 finish, highlighted by breakthrough in the first half of the season, Marina advanced to three Tour singles semi-finals. 2013 was her first Top 50 season and she won her first WTA Singles title in Memphis In 2014, Marina won another Doubles title in ‘s-Hertogenbosch which brought her career doubles titles to eight. Marina has represented New Zealand in Fed Cup and at the Beijing and London Games.