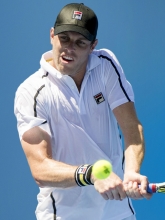 Born in Southern California, Sam Querrey began playing tennis at age four after being introduced to the sport by his mother. Querrey had a remarkable Junior career, reaching the quarterfinals at the US Open Juniors in 2004, the French Open juniors in 2005, and winning back to back hard court titles at the USTA Spring Championships and Easter Bowl in 2005. Querrey turned pro in 2006 and the same year, he became the 4th youngest player in the year-end Top 150, jumping more than 600 ranking places from the previous season. He made his ATP World Tour debut in San Jose and earned his first ATP win in Indian Wells. Over the course of his career, Querrey has claimed titles at numerous tournaments around the globe. He has consistently ranked in the top 50, with a career high ranking of 17.

Full name is Sam Austin Querrey. Father, Mike, is a mortgage banker and was drafted by Detroit Tigers but chose to play college baseball instead. Has one younger sister Ellen, who is an outstanding volleyball player at Thousand Oaks High School. Had a full scholarship offer to play at Univ. of Southern California before deciding to turn pro in June 2006. Hobbies include playing basketball, table tennis and golf. A Los Angeles Lakers (NBA) fan. Favorite surface is hard courts and considers serve and forehand his strength. Chiropractor is Casey Cordial. Coached by David Nainkin.