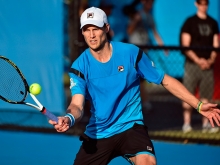 Seppi grew up playing on clay courts in Italy, but he also likes the speed of hard courts and considers the forehand his best shot. Since 1995, Seppi has been coached by Massimo Sartori. In 2005, he reached his first ATP Semi-finals and finished the season in the Top 100 for the first time. In 2006, Seppi defeated Hewitt for his second career win over a Top 10 opponent. He reached a year-end best ranking of No. 35 in 2008, after winning a total of 30 matches. His best showing was at the AMS Hamburg tournament where he advanced to the semi-finals. 2011 proved to be a spectacular year for Seppi, as he finished in the Top 50 for the fourth time in five years. Seppi won his first ATP World Tour title in Eastbourne, making him the first Italian to win an ATP grass court title. Seppi finished in the Top 25 for the first time in his career in 2012 and winning two ATP World Tour titles. In 2014, Seppi helped Italy reach the Davis Cup Semi Final for the first time in 16 years..

Nickname is “Andy”. Mother, Marialuise, works in a sporting goods shop; father, Hugo, works in transport business; has one younger sister, Maria. Idol growing up was Yevgeny Kafelnikov. Speaks German (from German-speaking region of Italy), Italian and English. Hobbies are football and skiing. Considers clay and grass as favourite surfaces and considers forehand as his best shot. Wife, Michela Bernardi, married on September 10, 2016.